Meeting commenced at 6 pm.  There were 9 members present. Becky was absent so Michelle led the meeting.  We had a brief discussion of upcoming writing contests and events.

April is National Poetry Month: The possibility of poetry readings at the Swanton library or possibly recorded at NorthWest Access TV was discussed.

Judy announced the limited publication of a booklet containing the winners of the 2018 Edwin M. Church Award as well as several of the contest entries. More details to follow.  Announcement for the 2019 adult contest should come in May. The deadline for the youth contest is April 1st.  Find the application HERE

Michelle mentioned the Itty Bitty Writing Space Anthology she will be published in.  The book is slated for a June release.

New member Harry G shared some of his past and present projects.  He has 2 Indie films on Amazon Prime: "Bridges" and "The Nightingale Chronicles". Both are filmed in Vermont. He is independently publishing a novel: 2 linked novellas. "The Green Mountain Sap Suckers". Currently creating a graphic novel/comic book based on the novel and adapting the text to a play manuscript.

Two requests for editing help were put forth by group members.  The first by new member Mike B for helping with his steamboat manuscript.  The second by Don on Becky's behalf.  A friend seeking help with editing/reviewing his 62,000 word manuscript on Street Rodding. Nancy and Kylie both offered to read portions of the latter. Nancy will read Mike's manuscript.

There was a discussion about meeting structure. Emmet suggested shorter opening remarks, announcements etc in order to leave more time for those who wished to read their work and receive feedback. Announcements, contests etc could be emailed separately. Kylie suggested sending work to group members in advance.  Giving them a chance to read and bring prepared feedback to the meetings. There was some conversation about interested group members holding meetings in between our regular monthly sessions.  Time, place TBD.

Writing prompts for March if you are interested. Phrase: "I lost sight of it two or three times." and/or the photo below. 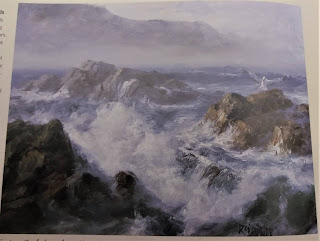 The meeting concluded with readings by 4 group members. Nancy read her short memoir piece "The Disconnect and Long Way Home". Kylie read part of her novel "Homebound" Scott read a proposed memoir style piece which he might elaborate on. Emmet read part of one of his Dystopia novels in progress.

Next meeting is Thursday, March 21st. 6 pm at the Swanton Public Library.

Our meeting commenced at 6:05.  We had a large group including a couple of new members who are becoming regulars! Discussion opened with t...